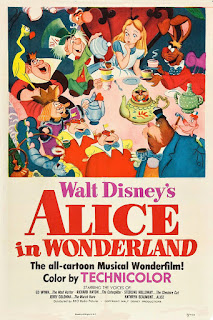 
A long-desired passion project of animation mogul Walt Disney 1951’s Alice in Wonderland was a project decade in the making that fell short of his expectations. A bright, whimsical, episodic, and nonsensical feature would initially fail in the eyes of its creator before attractive a cult following in the Disney cannon. From its 19th century source material, this animated adaptation of the Lewis Carroll stories attempts to turn them into a cohesive narrative, delivering audiences dozens of memorable characters and the dominate version viewers would remember despite numerous other incarnations through the years.

Alice in Wonderland is an animated musical fantasy about a young girl adventures into a imaginative world filled with characters and curiosities. The wandering mind of Alice (Katherine Beaumont) finds herself chasing a finely dressed white rabbit carrying a large pocket watch in a hurry down a hole, sinking further into a land of imaginative beings and situations. While ever attempting to follow the White Rabbit (Bill Thompson) through Wonderland, Alice encounters circumstances where she grows and shrinks by consuming different edibles, becomes lost in woods filled with all kinds of lively creatures, falls victim of a mischievous Cheshire Cat (Sterling Holloway), and take part of the most nonsensical tea party. Finally caught up to the White Rabbit, Alice finds herself in the company of the easily tempered Queen of Hearts (Verna Felton) who threatens to punish the young lady for the smallest inconvenience. Frightened by the threats from the Queen, Alice awakens from her imaginative and illogical dream. 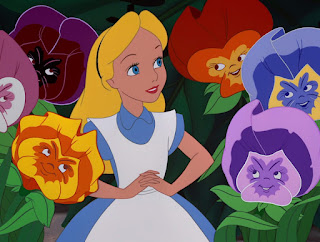 In a rather short feature, Walt Disney and his artists pack in an immense amount of imagination in this brightly designed tale which struggles to find definitive meaning. An episodic movie that attempts to turn a series of ridiculous scenes from Lewis Carroll’s books into a cohesive narrative, the film finds more success in its creativity in visuals, characters, music, and overall design. The characters pass interact with Alice are memorable and captivating, maximizing what little time they have on screen in this rather short film. The art design and colors are bold and vibrant, captured in a style equally as sticking standing out from the typical Disney fairytale feature. Imagination from the artists is apparent as from scene to scene each scenario delivers new and unsuspecting originality mixing the source material with Disney ingenuity. Where the feature tends to lack is in the ability to bring what was already a challenging source material together into a cohesive story. But do not let that take away from the overall joy and inspiration this film can deliver.

Walt Disney’s long connection with Alice date back to his days as a struggling animator in Kansas City when he took inspiration from the Lewis Carroll books in concocted his “Alice Comedies.” Taking a live action child actress, he imagined her an animated world of characters who interacted with her. The costly and imaginative concept would bankrupt his Laugh-O-Gram studio sending a young Walt him packing to California where he attempted to find backers to continue his projects. The Alice Comedies would get Walt attention an animator in Hollywood and grew his work, eventually dropping the concept of the live action girl from the cartoons and focusing on his growing world of animated characters.

Alice remained in the back of his mind as Disney delved into feature length animated features in the late 1930s, with consideration of Alice in Wonderland as his first full length animated feature. Difficulty in developing a solid story to develop Alice fell behind other film idea and eventual put on indefinite hold because of World War II. The short 1936 Mickey Mouse short “Thru the Mirror”  with the studio’s biggest star featured in a Wonderland situation is evidence that Alice remained on his mind as the studio was development Snow White, but it was not until after the studio’s recovery from WWII that Alice finally reemerged as a development concept. 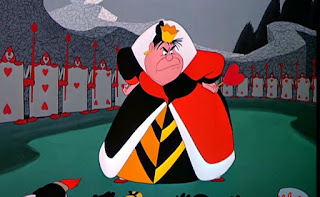 Difficulties in artistic style and story would be the greatest hurdles for getting Alice off the ground. Disney artist Mary Blair, utilized her unique eye form color and bold design to deliver a more simplified, yet surreal storybook quality that was less detailed then the book’s illustration, giving Alice in Wonderland a quality that Disney so enjoyed that he greenlit the project. Her artist choices would go on to shape most of Disney’s most popular 1950’s, as well as the popular “Little Golden Books,” helping to shape generations of children’s illustrations as well.

Now the artists had to decide among which segments from “Alice Adventures in Wonderland” and “Through the Looking Glass” were to be included and attempt to sew them into the singular narrative. The overall concept would be wrapped up with all scenes having taken place in a meandering dream. With the episodic nature of Alice’s adventures, it was simple enough to divide the segments among artists and directors as the picture tended to stay close to the creativity of the books in most cases. Through the creative process segments were whittled, but like the book the overall story continued to lack the drive of a singular narrative which eventually frustrated Walt to the point of losing interest.

Since Lewis Carroll’s work contained a vast array of poems and rhymes Disney hired many songwriters to pen music to accompany the words along with a number of new music to support it. Because of this, dozens of pieces of music were written for the film making Alice in Wonderland the Disney film to feature the most musical tracks, even though a vast number of tunes were rather short, many less than a minute long. Much of the unused material would be reworked and became music for later projects, most notably Peter Pan (1953) a couple of years later with new lyrics. 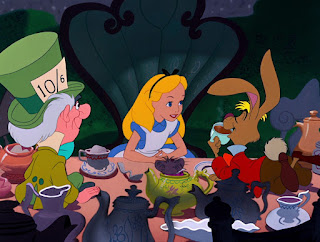 The voice cast of the Alice in Wonderland features many names that would be synonymous with Disney works in the 1950s. The newcomer was Katherine Beaumont, a 12-year-old British actress delivered the perfect mix of childlike quality with a sense of proper English etiquette to Alice, even providing as live action model for the role. A plethora of character actors fill the colorful menagerie of the supporting cast. Included are the likes of the distinct Ed Wynn as the Mad Hatter, the wacky voice of Jerry Colonna as the March Hare, the long British voice of Richard Haydn as the Caterpillar, and the soft-spoken Sterling Holloway as the Cheshire Cat. The cockney delivery of J. Pat O’Malley was supplied for the troublesome twins Tweedle Dee and Tweedle Dum, the gifted radio actor Bill Thompson as the White Rabbit among other voices, and sometimes motherly, but often bellowing voice of Verna Felton as the Queen of Hearts. These talents would make many visits to the Disney studios to lend their voices over the years in various upcoming projects.

Following the success of Cinderella in 1950 NBC approached Walt Disney to create a special holiday themed program for Christmas Day 1950. Walt took the opportunity to showcase the upcoming Alice feature in a program that featured segment from many past projects. Kathryn Beaumont was particularly highlight as her charm matched that of her voice as she helped host the show alongside of Walt himself. For early television it was a highly viewed program in the late Christmas afternoon in American homes that owned television sets, exciting viewers with the upcoming feature.

Sadly, Alice in Wonderland never went the direction that pleased Walt as he recognized the feature lacked the genuine heart compared to his fairytale features. Even before the release Walt lost interest as the feature opened to lesser box office numbers than Cinderella and citics were mixed, noting its pace and lack of material omitted from the books. The movie would not see a theatrical re-release during Walt’s life, instead it was showcased a number of times within his week anthology program which began in 1954. Despite being disappointed in movie he was still able to use it as high quality antimutation to showcase to audiences on his free television program which kept the film in the minds of viewers for many years.

In the 1960s and 1970s the feature discovered an unlikely new audience as individuals who experimented with recreational drugs began to embrace the film. The vibrant colors, eccentric characters and meandering stories added to the sensory overload for those under the influence of mind altering substances giving rise to a unintended cult status among this culture.

Over the years Alice in Wonderland may have lacked the impact of Disney’s more popular princess-style films, but its overall style and design allows it to remain a classic for the animation studio. To this day Disney continues to benefit from their motion picture as a cultural icon in its own way. Alice may not have been the most popular of the Disney films from the 1950’s, but it remains a classic belove by millions who look back fondly on the wild production whose roots with Disney date further back to before Mickey Mouse. 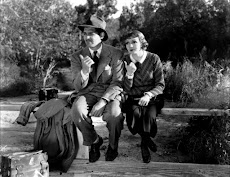